Concrete as a building material was already used in ancient Rome, but both its proper development, and the development of concrete structures took place only in the second half of the 19th century., when the industrial production of artificial cement was launched.

The load-bearing structures of residential buildings can be longwall, skeletal or longwall-skeletal. In industrial hall construction, skeletal structures are usually used.

At the end of the 18th century. Cast iron was first used in construction, and then steel. The introduction of steel to construction has resulted in significant changes in the methods of constructing elements and building systems. The first solutions of steel structures were modeled on the shapes of wooden structures used at that time, stone and brick. Steel structures have been widely used in the construction of bridges from the very beginning, exhibition pavilions, railway stations etc..

At the end of the 19th century. there was a dynamic development of high-rise construction. The tallest buildings in the world to date are of steel construction. The figure below shows some of the tallest buildings and structures constructed in concrete or steel. The development of structures of ever greater spans and heights is possible thanks to the use of concrete and high-strength steel. 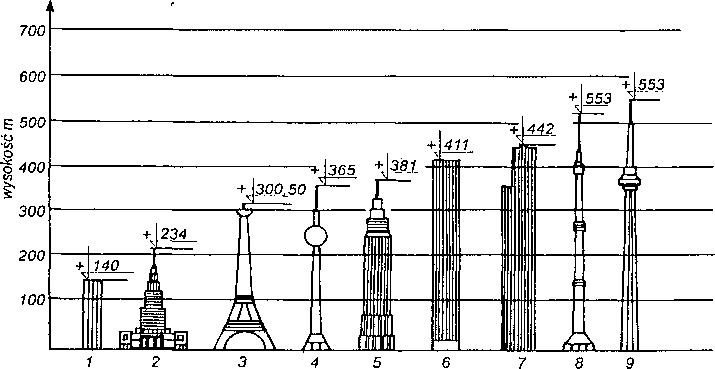