The lift door or lift vestibule should have a fire resistance class of not less than half the fire resistance of the walls, and the fire lift shaft should be equipped with smoke extraction devices in accordance with the regulations.

In order to prevent the spread of fire, buildings should be divided into fire zones. Fire zones may include terrain, on which construction objects are located or may relate to the buildings themselves. In buildings, belonging to the category of danger to people, each floor is separated from another floor in a way that protects against fire penetration. The figure shows, how the separation of fire zones in buildings can be made.

In rooms, where people may stay, there is a safe exit leading directly to the open space or directly or indirectly on the horizontal or vertical general communication routes, the so-called. escape routes. Stairs are used to evacuate people, ramps, ladders, gallery, crossings and cranes.

Depending on the category of threats to people, the permissible length of escape routes is specified in the table. 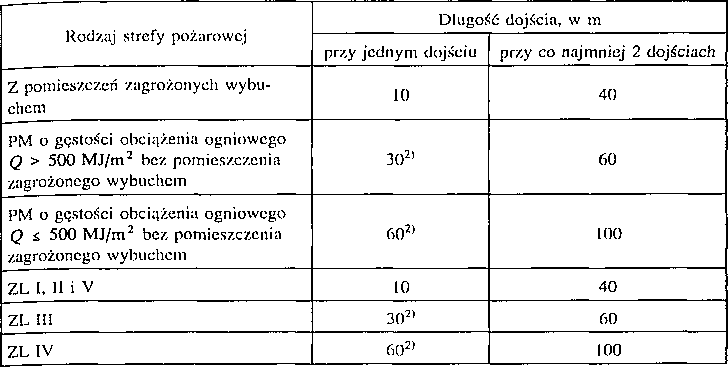 1) Dla dojścia najkrótszego, however, for the second approach, the length greater by 100% from the shortest. These approaches may not overlap or cross each other.
2) W tym nie więcej niż 20 m on a horizontal escape route.