The Etruscans gave the foundations for the correct building of vaults, and the art was developed and spread by the Romans. The figure shows the shapes of some of the most common vaults and domes so far. 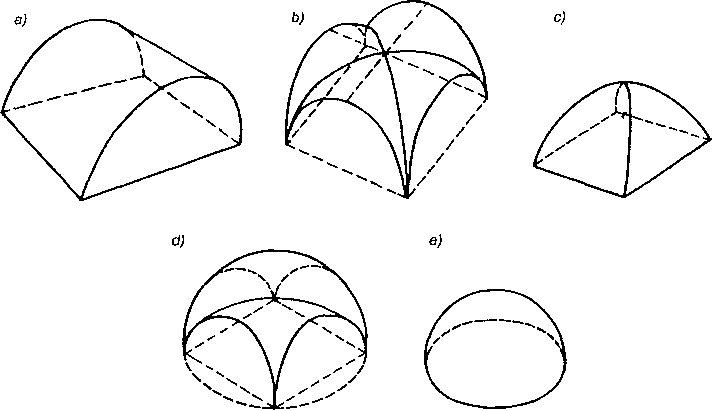 To famous Roman buildings, with dome-shaped coverings, includes the Pantheon (temple of the gods) in Rome, erected at the beginning of the 2nd century AD. (span dome 43,6 m) and the Hagia Sophia Basilica in Constantinople, built in 532-562 (span dome 33,1 m).

For a long period of time, no covers of a greater span than the dome of the Pantheon in Rome were built. Only in years 1538-1592 erected over the Basilica of St.. Peter in Rome, a dome with a double vault and a span 42,0 m, i.e.. similar to the span of the Pantheon's dome.

In the 20th century, along with the development of reinforced concrete structures, it was possible to build domes with a larger span and much lighter than those built of stone and brick. After the introduction of concrete and reinforced concrete, the spans of modern domes become larger and equal: Palazzetto Sports Palace in Rome - 58,5 m, sports hall in Montreal - 83,6 m, and in Zasławice - 56,0 m.

Builders of the ancient and later periods (do XIX w.) they were characterized by a good knowledge of the construction of both building systems, and buildings, based on the method of folding and spreading forces.

The forces acting on the beam are transferred to the supports, causing the beam to deflect and creating internal forces in the beam - bending moments and transverse forces.

Under the influence of external forces, internal forces arise in the arch and vault, which mainly cause compression of individual stone blocks. 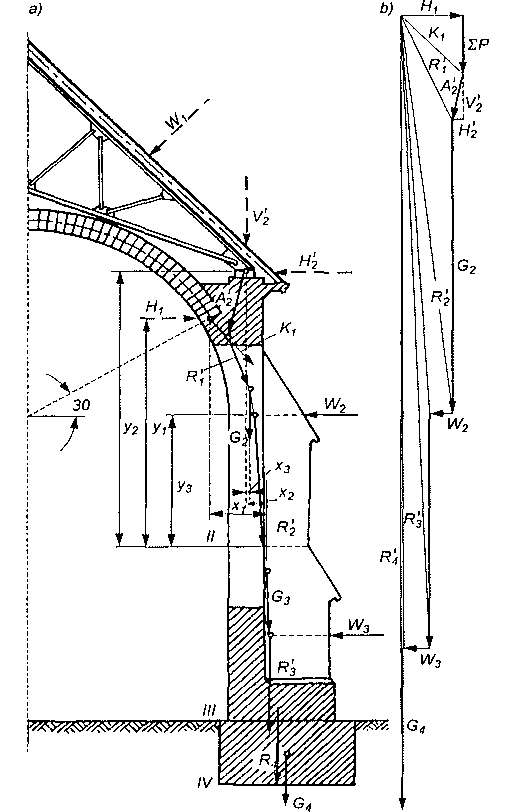 Distribution of forces in the vault and walls due to own weight and wind: a) building cross-section - force course, b) a clear way of determining forces; H1 - expansion force from the vault, H2 - horizontal force to the truss, W, - forces caused by wind.

If the normal force is transmitted diagonally to the support (headboard), a horizontal force arises, called strut. The greater the slope to the level of normal force, the greater the expansion force in the arch.