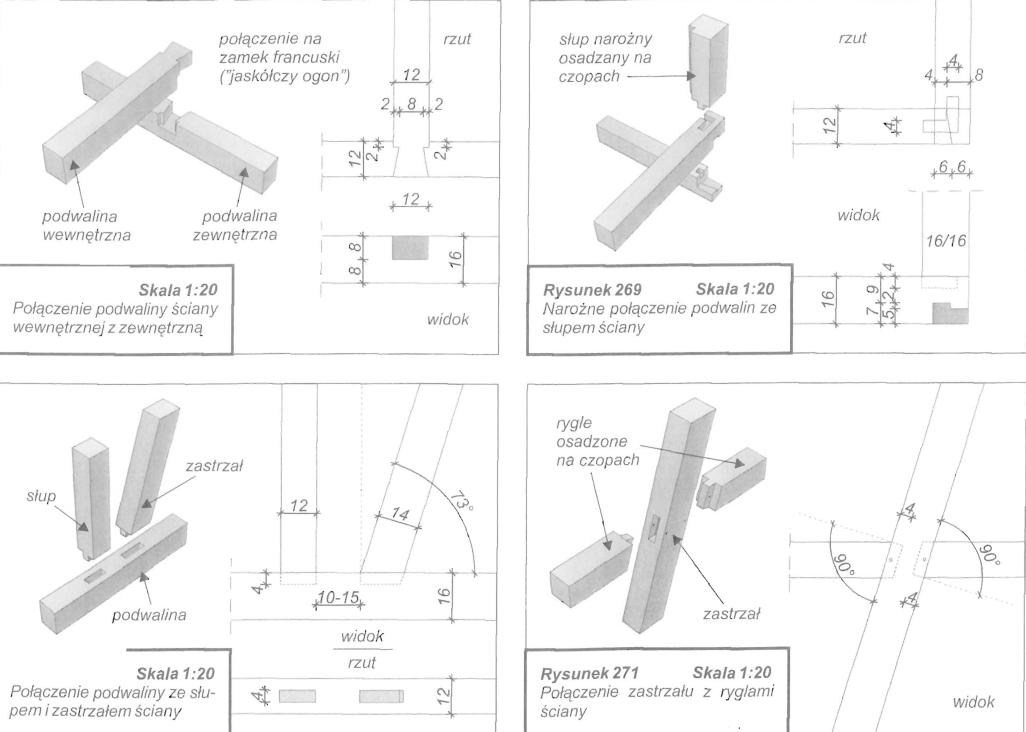 The distance between the main columns can be reduced by placing intermediate columns between them. These columns should be placed with an axial spacing of 1,0 -1,2 m. They are connected with a foundation on the so-called. tenons (sockets depth approx. 7 cm).

• Strikes – diagonally positioned wall stiffening beams, to provide the building with stability with horizontal forces in the direction of the wall length.
In single-storey buildings, braces are used primarily in corner fields, tilting them upwards towards the corners. In multi-storey buildings, the first floor struts have the opposite direction, i.e.. such, that the lower end of the 1st floor brace falls on the upper end of the ground floor brace. The strut is inserted into the ground beam and cap, and not into pillars,

• Shackle – horizontal beam, which forms the top boundary of the wall and supports the joists. It is placed on posts and struts. Connects to the poles on the so-called. overlays or tenons,

• Rygle – short beams arranged horizontally between the columns. They are used for the horizontal demarcation of window openings (as benches and chokes) and door (as lintels). The transoms are also used to divide the wall into smaller fields (about 1 m) and stiffening the whole structure,

• Filling – Filling the frame and transom structure with bricks has a long historical tradition (called "half-timbered"). The solution with a visible structure is rarely used today due to the difficulties in sealing the connection between bricks and wooden beams. Currently, the most commonly used skeleton filling is thermal insulation material, so that the structure is hidden under the external wall sheathing.