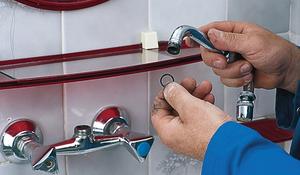 How to fix a dripping tap?

The most common cause of a leaking tap is worn seals. We can, of course, replace the entire tap with a new one, but it will be much cheaper to fix it yourself. A new gasket costs pennies and can be installed in minutes – of course, if you know how.

How the taps work

The most common cause of a leaky tap is worn seals or limescale, which has settled in the socket of the tap. Chunks of rust may also become lodged in the socket, which, along with water, got out of the pipes. Then it becomes necessary to clean the seat and replace the gasket.

Removing the knob from the spindle is not difficult. Use a thin screwdriver to lift the lid that covers the screw or nut, which the knob is screwed to the upper end of the spindle. The knob of the knob is put on the spindle ended with characteristic notches, i.e. the so-called. splinter. The next step, we need to do is to unscrew the fastening nut. Pulled gently up, the knob will slide off the spline easily and then it becomes easy to unscrew the head from the tap socket. We use an adjustable wrench for this activity, as before by turning it to the left (Right threads are always unscrewed to the left). After removing the head, we will see a mushroom, to which a gasket is attached with a nut.
We also unscrew the nut to the left, we remove the old gasket and reassemble all parts in the reverse order.

Leakage at the mandrel

If water is leaking at the plunger, the cause may be a worn O-ring (in new type batteries) or loose packing nut (in the old type).

In the first case, it is best to replace the entire head, which is not expensive. In the latter case, the packing nut can be tightened, but it is a temporary solution; eventually you will have to replace the head.

Some batteries, even those with brass heads, they do not have traditional gland nuts. The mandrel is fastened in the head with a clamping disk. The seal is made up of two or more O-rings placed on the spindle – if they have worn out, they must be replaced.

If we want to remove the knob and unscrew the head, we proceed as above. After removing the knob, remove the disc clamped on the end of the spindle, which should come out freely. Then the O-rings can be removed and replaced.

Batteries of a different type and principles of their operation

Due to the type of power supply, we distinguish between two types of batteries: standing and wall mounted. Currently, bathroom fittings are almost always equipped with a mixer, i.e.. Eden kran, in which cold water is mixed with hot. The faucet may be stationary or rotating.
The principle of operation of standing batteries (mounted on sinks or kitchen sinks) and wall mounted (mounted above the bathtubs, sinks and sinks) is the same. After unscrewing the knob, cold water flows into the faucet housing and flows out through the spout.
Cold and hot water, meeting inside the battery body, enters the mixing chamber, which is relatively extensive, and this is where the two streams are mixed. To obtain washing water at the correct temperature, hot and cold water flow should be dosed, until finally a mixed stream of water of the required temperature and hot water flows from the spout, mixing them according to predetermined parameters. However, repairing them is not so simple and the help of a specialist may be necessary.

A clogged spout strainer can be just as annoying. This seemingly small detail is an important element in the proper flow of hot water. Pieces of rust or limescale washed out of the pipes with water settle on the strainer (also called the aerator) and can reduce the water flow to such an extent, that our bathroom gas stove stops heating water.
Cleaning the strainer will restore the required water flow and the system will be back to normal.

Dismantling the strainer is very simple.

An adjustable wrench is required for this. I will, in which the strainer is attached, unscrew to the left, holding the spout with your hand. During disassembly, remove the gasket, we check its condition and if it is deformed, replace it with a new one.

Immerse the strainer removed from the spout in 10% warm vinegar solution. After a few minutes, remove them from the solution and rinse them under running water, then put it back into the spout and screw it with the key to the right.

On this occasion, it is also worth removing stone from the entire faucet and restoring its former glow.
Once we took the battery apart, to replace the seals, please boil the battery in 10% vinegar solution – of course, having previously removed all its rubber and plastic parts. This action will not only improve the appearance, but it will restore the patency of our battery.

Before replacing the gasket in a regular tap, turn off the water supply, then unscrew the knob, to drain the water remaining in the pipe.
Before we start to disassemble the faucet, it is worth stopping the sink, so as not to lose the disassembled parts.

TAPES WITH A CLOSE VALVE

There is not much difference between taps with a shut-off valve with a fork mechanism and ordinary standstill taps., to turn off the water supply to the valve, and also unscrew all drains that he controls. This way we let the rest of the water out of the pipe, to which the valve is mounted, thus reducing the risk of air entrapment.