Spread footings take loads from columns in frame buildings or from columns that support other building structures. Single foot foundations are then made, when the spacing between the columns is large enough, and the ground has such bearing capacity, that there is no need to use serial benches.

Under the pillars, with axial forces, usually square feet are made, while under eccentrically loaded columns, rectangular feet are used. The most commonly used cross-sections of the footings of foundations are shown in the figure. 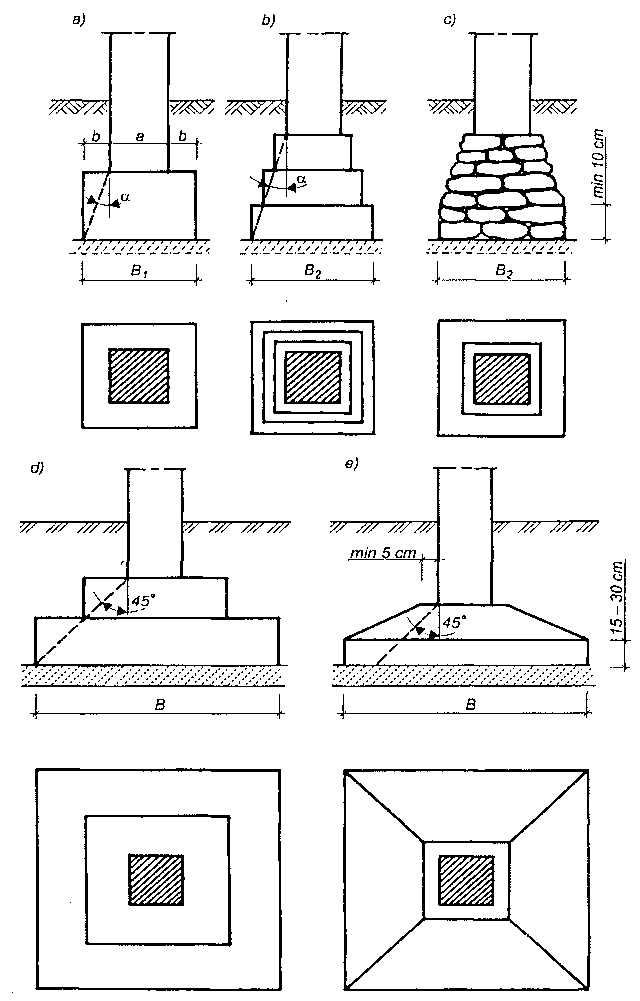 Types of spread footings: a), b) made of bricks, c) made of stone, d) made of concrete, e) reinforced concrete foot.

Rectangular shape in vertical section (rys.a) is used then, when the foot dimensions are small, i.e.. under lightly loaded columns. In other cases, stepped and trapezoidal feet are used. These shapes with larger foot dimensions are used mainly for the sake of saving concrete. The execution of trapezoidal feet is more difficult than stepped feet, and this is mainly due to the need to use more complex forms (formwork).
Brick or stone footings are mainly used under axially loaded columns, e.g.. these can be brick or wooden poles. On the other hand, concrete or reinforced concrete footings are usually made under eccentrically loaded columns, because it is easier to fix the pole in these feet. The columns loaded eccentrically are most often made of concrete or steel.
Brick feet (Lynx. b) is performed with offsets (deficits) with 2, 3 or 4 pages, the shoulder width S is usually 1/4 bricks (6 cm). The ratio of h : s depends on the type of mortar, similar to brick benches.
Stone alloys (rys.c) are made without steps as trapezoidal with a slope of approx. 50-60°. The height of the foot at the edge depends on the dimensions of the foot and should not be equal to, less than 15-30 cm.
Stepped foundations, mainly concrete, they should be so shaped in the vertical section, that the truncated pyramid with sides inclined to the horizontal at an angle of 45 ° would fit inside the foot contour (Lynx. d). In reinforced concrete feet, the principle of the inclination of the sides of the pyramid with an angle of 45 ° does not strictly apply.