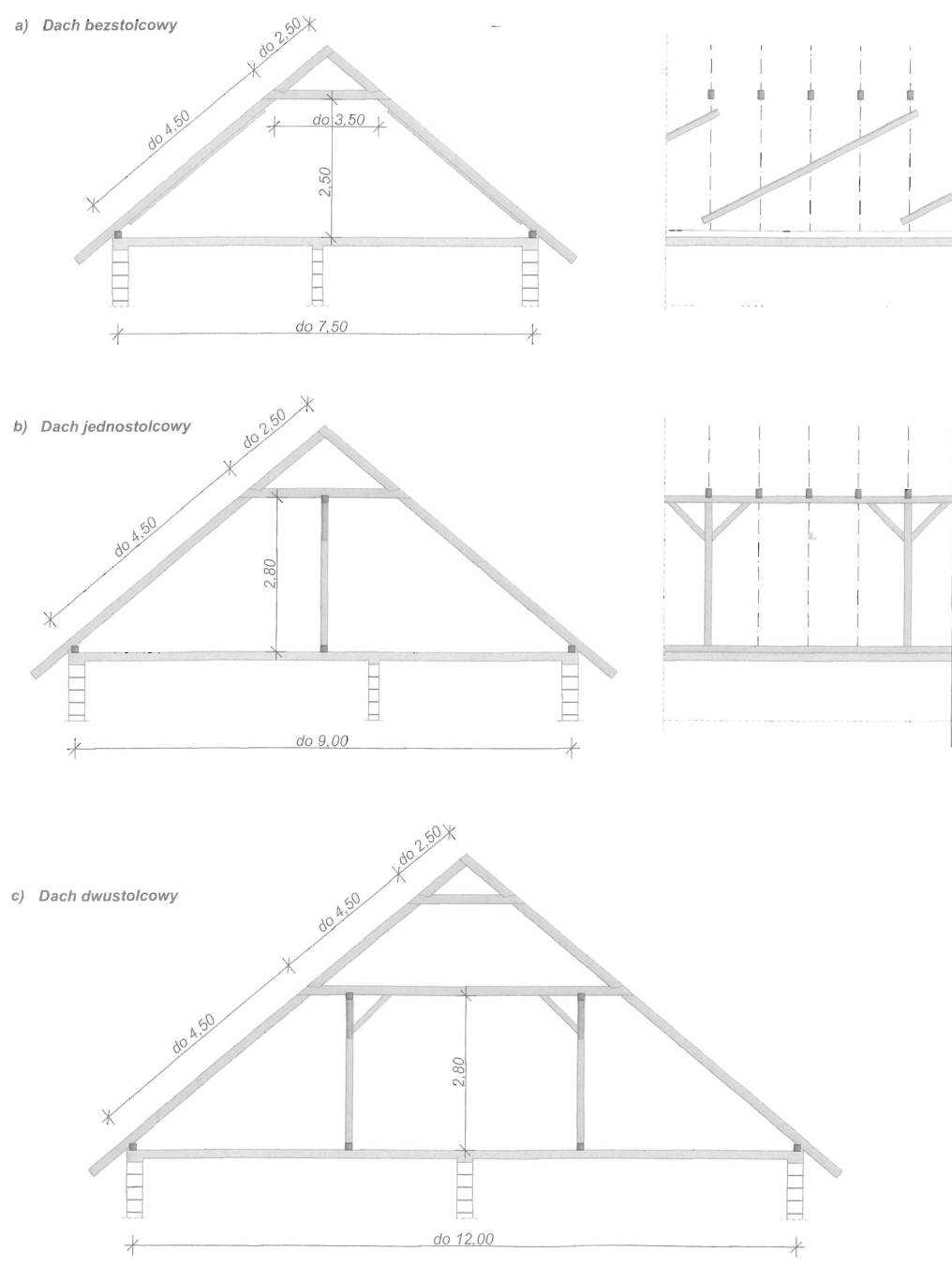 Roofs with collar beam construction, with different spans between the external walls of the building.

• Rafter truss (pillarless) – The simplest roof construction in use, when the span between the external bearing walls does not exceed 7,0 m. In the rafter truss, each of the two rafters forming the truss rests only in two places – in the ridge and on the wall above the outer wall. The rafter framing is secured against wind by stiffening the so-called. windchests, that is, diagonally nailed boards. The basic load-bearing element is a pair of rafters connected to each other in a ridge length 4,5 – 6,0 m, spaced at intervals of 80 do 120 cm Rafters are connected with each other in the ridge on the so-called. correcting or pinning overlay. The rafter cross-sections are from 5 x 14 cm do 5 x 16 cm, depending on their spacing and loads. The dimensions of the wall are usually 10×10 cm. Murlates are attached to a wall or a reinforced concrete ring with steel anchors with a nut, deployed at 2,5 -4,0 m,

• A collar beam – It is used then, when the span between the outer walls is greater than 7,0 m and the use of a rafter framing ceases to be economical. In a collar beam structure, each pair of rafters is connected with a collar beam, that is, a beam bracing the two rafters. Jętka transfers the horizontal forces from one rafter to another and thus the rafter on the side opposite to the wind direction cooperates in the transmission of wind pressure. At the same time, the collar allows the span of the rafters to be increased under the action of vertical forces.
The largest span of collar beams is 12 m – the minimum recommended angle of the rafters is 35 ° and their maximum length
4,5 + 2,7 = 7,2 m. This gives the limiting span of the truss 11,8 m.
The hollows act as struts and therefore the entire load on the roof is transferred to the outer walls. This requires anchoring the wall laths and securing the knee walls against sliding apart, by making an additional reinforced concrete beam under the wall and possibly bracing it with reinforced concrete pillars with the ceiling beam over the last floor.
In order to stiffen the girders, additional purlins can be used above the collar bars (at the junction with the rafters).

• Purlin and tick truss – It is used for both steep and gentle roof slopes. Such a truss consists in resting all rafters on purlins – horizontal beams supported by columns and braced with them with swords (beams at an angle of 45 °, approx 1 m). The tongs cover each rafter and pole on both sides.
The claw-purlin harness is an economical solution in terms of the amount of wood used, the downside is the lack of a structure that would allow to make a ceiling above the attic.
While in a grooved roof, all loads are transferred through the walls to the external walls of the building, in the claw-purlin roof, most of the loads are transferred through the columns supporting the purlins to the attic ceiling structure, and only some of the loads are taken over by external walls.

There are many design elements for different types of construction, which is solved similarly:

• Mono-pitched roofs (desktop) – Under no circumstances may the shed wall take any horizontal loads from the roof truss, but it must be stiffened by the truss and held in place by suction or wind pressure.

• Roof openings – It is made to ventilate or illuminate the attic, or as roof hatches. Most often, the opening is placed between the rafters and then its width is equal to the spacing of the rafters. When the opening is larger than the rafter spacing, then the middle rafter is based on replacement.

• Supporting the roof truss on the walls – In places where it contacts a wall, concrete, etc.. the truss elements should be insulated with two layers of roofing felt.