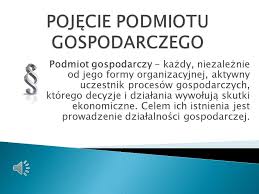 Developers don't have identity issues. They are defined as an economic entity.

The term is derived from the law, which result from the act on economic activity of the year 1988. This term was guided by the task of defining each of the participants in economic activity, as, inter alia, natural persons conducting business activity, including state-owned enterprises, as well as cooperatives and partnerships or capital companies.

Before World War II, the function of the entrepreneur was performed by the term merchant, which, due to the collectivization of the economy after the war, eliminated this term. When from mid-years 80. shifts towards marketization have progressed, a neutral deadline has been proposed: economic entity, which, having capitalist connotations, could be accepted by the then authorities.

The accession process to the European Union in the nineties forced the translation of Polish laws into the languages ​​of the EU countries. Meanwhile, the term economic operator remained untranslatable other than by means of the descriptive method. Act of 19 November 1999 year introduced a change – the term economic entity has replaced the term entrepreneur.

The Polish legal system does not have a uniform definition of an entrepreneur. The functioning definitions come down to this, that the entrepreneur is a subject of law, who running a business (or professional), generates profit. In the legal sense, Interestingly, "Entrepreneur" is not synonymous with an enterprise or a company.