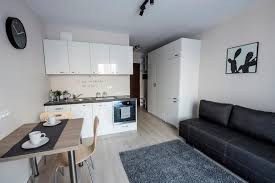 Studio apartment is not only a saint marital status. It is also its own M., small because small, but often cozy, just in time for two. Mr. Mirek forgot about the studio apartment, but let's see which one.

– We finally took this loan for little M. – says Mr. Mirek, until recently, in an informal relationship with one and only, which he met in college. – I did not know, that this is how it will turn out. After all, I had a master's degree in science and lectured on goods in a large-area supermarket. There is a chance for a cabbage stand after many years, and from there it is known, because you can already see the cash register.

Meanwhile, credit was devouring a large proportion of both of them, that is, Mr. Mirek, because they lived for the so-called: her.

– How was I supposed to know. I didn't suspect anything. Yes, she left for her new job in the evening and bought a Jaguar a month later, but I made a mistake, because I was only thinking about a career.

Mr. Mirek was soon left alone in the studio, that is, actually with two studios at once.

– She announced to me by phone, that he is leaving, and takes the credit on himself – Mirek despairs. – I know, maybe it's stupid, however, I have my plans. I'm not gonna jump out of a ground floor window. I picked myself up somehow. I want to rent a studio to someone for 3 thousand. zlotys, because these are the prices. I will live alone in a room on a student flat 500 zlotys, of course only to sleep, because I just did a manual lift course, so I can carry large pallets of mineral. And this satisfaction, that I am such a mini developer.