Planning is an extremely important activity in any renovation work, especially when laying tiles. A good plan will not only allow you to achieve a tidier and more symmetrical finish, but it will also save you unnecessary and costly losses.

The tiles at the edges of the walls and at the corners should be of equal size, giving the room a symmetrical appearance.

In order to achieve such an effect, start laying tiles from the center of the surface. If you had started in the corner, it might turn out, that there are whole tiles lying on one wall of the room, and on the other half. So the first step is to delineate the center of the sides of the surface (most often a square or a rectangle) and the tension between the centers of the opposite sides of the chalk-lubricated string. Then pull it back slightly and release it, getting two crossing lines. The point where the chalk lines intersect will be the focal point.

If the room has an irregular shape, it is best to lay the first row of tiles parallel to the wall opposite the main entrance. Use a chalked string to mark a line parallel to this wall, and then, using a compass, mark the second line crossing the first at right angles. Finally, draw a third line in the middle of the room, perpendicular to the other. The resulting intersection point marks the location of the first tile.

Developing a way to arrange the tiles

It will be best to divide the work into four stages marked by intersecting chalk lines. First, arrange the tiles diagonally to the corners of the room, so as to calculate immediately, how many tiles of a different size will you need to cover all the edges of the walls.

Move in both directions from the first tile, forming a right angle and fill in missing spaces. If the room is irregularly shaped, you will need a piece of wood to mark the width of the tiles. 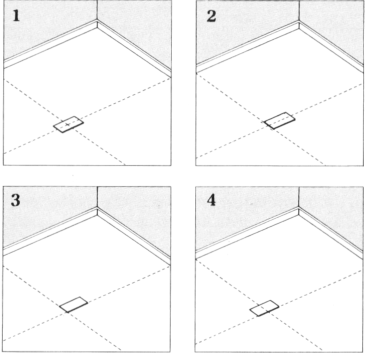 Where to put the first tile? 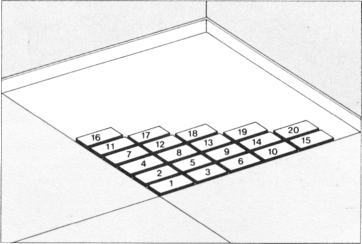 The order of laying tiles
Within each square, move in both directions from the starting point, forming a right angle. make sure, whether the same number of tiles will be needed for each edge.